Success Circles And The Law Of Influence 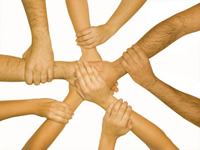 It’s Not What You Know, It’s Who You Know

With the advent of the Internet the world is certainly getting smaller, but before you spend thousands of dollars on advertising or dedicating resources to Search Engine Optimization (“SEO”), you can start your marketing strategy with one person.

One person has the potential to reach a network of thousands. Is this really possible?

Guglielmo Marconi came up with one hypothesis. The Noble Prize winner who broke down barriers of communication with his radiotelegraph invention also pioneered the theory of Six Degrees of Separation, which suggested that every person on the earth can be connected though a chain of only six people.

An idealistic notion, but not one that can be easily managed in networking terms. It’s easier to start with who you know—your success circle.

A success circle immediately outlines who you can reach to promote your business and this starts with your social network. Tell your friends about your new business, tell your family, and get them to tell others. If you can think of 40 friends and 20 family members, you already have 60 people who know about your business. Then if your friends and family tell another 60 people each, you are already looking at an additional 3600 and the figures inflate as the circles expand.

Of course, success circles intercept too, as many of your friends and family do know one another, but you see the basic principle… Start with who you know.

When your friends and family promote your business directly, and their outlying networks do the same, this is known as an active referral or word-of-mouth, the ideal way to network your product. When they offer the information if asked, this is known as a passive referral. We would certainly ask our friends to recommend a local electrician or plumber if needed.

As an example, a garden designer starting out on his own will initially be offered by work by people he knows, who will then recommend him to others in their circles and his outreach and business expands.

Another huge factor in promoting business sales is the Law of Influence, established by Dr. Robert Cialdini, social psychologist and author of the best-selling book Influence: The Psychology of Persuasion.

Dr. Cialdini determined six principles of influence, which need to be considered when you want to persuade your customers to buy from you.

Describing them as weapons, Cialdini’s six laws of influence are…

There you have it. My hope is you take advantage of your own success circles and the Law of Influence. It makes building and maintaining your Internet business a bit easier.

Tagged with: influence • persuasion • success circles
Like this article? Please consider sharing it! :-)

One Response to Success Circles And The Law Of Influence